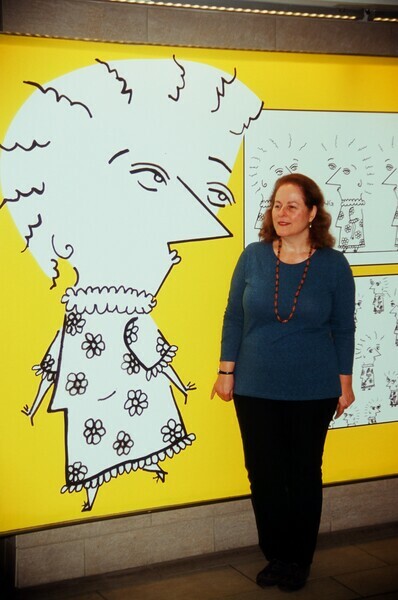 Andrea Beizer is an artist, cartoonist, architect and college professor.  The one informs the other, each part being an important facet of her life.  This site is devoted to the first two, her art and her Alice© cartoon strip.   Having grown up in an artistic family she was exposed to the visual arts early.  She was drawn to "outsider art" before it became popular, and has looked for inspiration in the tribal artworks of Africa and Australia, folk art as well as the ancient artwork of Myan and Summarian cultures.  Her interest in these types of works reflects her interests in myth and spirituality.  This may be seen in both her artwork, and in Alice© cartoons as the character struggles to find meaning in the world around her and her life as well.  For information regarding her architecture practice,
please view a : www.aebdesigngroup.com
WebComic:
Alice is now syndicated by King Features and may be found 3 days a week on their online site: Comic Kingdom.
Alice© Cartoons @ www.alicecartoons.com - Alice© was originally published in the Philadelphia Architect from 1985 - 1990 and Manhattan Comic News in 1990.  She was brought back to life in 2013 under the auspices of Tony Auth.  Alice is a character who questions everything including herself.
Alice may now be viewed in the  Humor Times or www.humortimes.com in the Cartoon Gallery Section.
EXHIBITIONS

Art of the State: Pennsylvania 2017 at The State Museum of Pennsylvania.  131 works chosen for the exhibition from 2200 entries.  One Drawing - "On Dictatorship", Harrisburg , PA.  Summer 2017

“HOME” at the GoggleWorks Center for the Arts, two paintings, “Night Kitchen and Night Watch, Juror was Genevieve Coutroubis, Director at the Center For Emerging Visual Artists, Philadelphia, 2013

“The Art Of Social Change”, two pieces were selected: “Debt Malling” and “Why, Why Not?”

Under The Sun and The Moon, PII Gallery, Philadelphia, Pa - 25 paintings and drawings, Spring 2012 (Solo Exhibition)

Art Around The Edges II- Port of History Museum, Painting "Into The Woods" Juried by Curator Corliss F. Cavaliere, Fall 1991

"About Alice - A Cartoon by Andrea Beizer" by Leah Douglas, Director of Exhibitions at the Philadelphia International Airport

CATALOG for "Equalibrium", Women's Caucus for Art, "What Are You Looking For", Jurors were: Beate Minkovski and Mary Stoppert at Woman Made Gallery, 2014.

"Alice at the Airport" by Mellony Armstrong, Associate Director of Communications at Moore College of Art and Design

In addition, work may be found in collections in New York, Italy, Brazil and Mexico.